The Canines of Villi Poni Farm 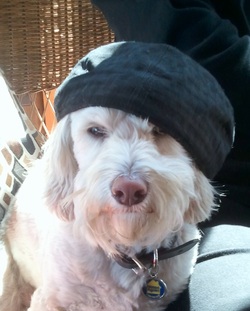 This is Charlie.  We're not too sure what breed or breeds of dog he is. Charlie was a rescue who spent the first four months of his life in a crate with another dog in the cellar of a "puppy mill".  He was supposed to be completely devoid of social skills, but it turns out that Charlie has more personality than most people.

Charlie loves to spend time with George, working around the farm, riding on or in anything that George drives. He is great at finding ways to drive George crazy too, like hiding on him, or sitting under the car just out of reach when he knows we are going out and he can't come along.  Every day he has his Charlie "fits" where he runs around in circles making silly growling sounds while the rest of us, human and animal alike, just stand there and watch, amazed. He is as happy as can be and we wish we could bottle his energy and happiness.

Charlie is the first to greet visitors, happy to give lots of kisses.

This is Blue. Another rescue, Blue is a Border Collie who came from a shelter far away. When Blue was being brought to us from out of state, the woman from the shelter got into a terrible car accident and Blue was lost in the woods during the mayhem that followed. Both miraculously survived.
Ironically, Blue's favorite thing to do, besides bestowing people with loads of affection, is to ride in the car.

Blue is steadfast, loyal and patrols the farm watching for anything out of the ordinary. A good,good boy, he has a heart the size of Wyoming and wants only to be petted and hugged.

And of Course we can't forget Mabel--click on her pic!!!

Mabel is a Tibetan Terrier. Her breed was raised solely for the royalty of Tibet and were treated like royalty themselves. Mabel certainly maintains that status here, as the diva of Villi Poni Farm.  The main character in 3 of sanctuary founder Emily Chetkowski's children's books, she knows  she is a celebrity and acts accordingly. Mabel is our senior pup but she certainly doesn't show it.

Mabel loves to be around children and has a repetoire of tricks to entertain them. She has accompanied Emily on  many school author visits where she's met more than  90,000 children  and has attended more book signings than anyone can remember. Whether she's on the road or at home, Mabel's life is a stage, making children smile.