All About the Newfoundland pony 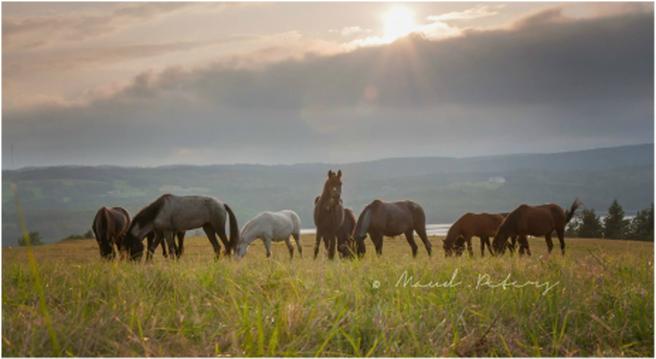 Photo credit and copyright - Maud Peters, 2014.
Newfoundland Pony Facts
The typical Newfoundland Pony:
What are Newfoundland Ponies used for?  Anything and everything.  They can work the garden, haul your firewood, pull a cart or a sleigh, and take the kids out for trail ride, all while being your best friend. They are the pony you'll never outgrow.™
The Newfoundland Pony is often referred to as the "Poor Man's Horse" - we prefer to think of it as "economic". These ponies thrive as backyard ponies. They are multi-purpose, and can do anything. Oh, and did we mention some of them even like boat rides?
​
Video credit to Twillingate Tours: This is our stallion Ammy's full brother. This is what we mean when we say the pony has adapted to life in Newfoundland. Can you imagine any other pony or horse hopping into a boat like that?
Newfoundland Ponies Are:
​ What is inside the pony is as important, if not more important, than what is on the outside of the pony. Their temperament is most remarkable and stands out distinctly.  Very people-friendly, trusting and willing, they are described as having more dog-like personalities than horses. They have a strong sense of herd, of family.  They readily accept people into their "family" as well.  They generally think before reacting, are very curious and not easily frightened.  Stallions tend to be sweet and docile.

Now here's the cool part: the Newfoundland Pony has no known genetic defects. How awesome is that? It means that they don't have the modern day equine's struggles with PSSM, HYPP, LFS, OLWS, or any other inheritable diseases. This is why the Newfoundland Pony Conservancy Center, along with Newfoundland Pony Society and and other Newfoundland enthusiasts, are trying so hard to save the Pony from extinction. While we currently discourage cross breeding using the mares, our hope is to one day return the Pony's numbers to their previous population of several thousand, and when we do, the Newfoundland's healthy genetics can be used to help other breeds stabilize. Newfoundland crosses retain their healthier genes and are generally good-natured, healthy, sturdy and intelligent horses.

Also "inside" is a very diverse base of genetics, carried forward from their ancestors - Exmoor, Dartmoor, Kerry Bog, Eriskay, New Forest, Scottish Galloway (extinct), Dales, Highland, Fell, Connemara, and Welsh Mountain.   The Newfoundland Pony is a
four-legged time capsule of antique genetics, having not had their genetics manipulated by people as the majority of their ancestors did. Most of those breeds are not the same today as they were during the Newfoundland Pony's creation. People changed these ancestral breeds by adding outside blood to their gene pools to make them suit human needs as horses became less essential to day to day life, and more of a luxury. Some of those "improvements" also unknowingly added undesirable traits and health issues to those breeds - such as the American Cream Draft's introduction of the junctional epidermolysis bullosa gene, or "JEB" - also known as "Hairless Foal Syndrome" or "Red Foot Disease". In a large population of horses, introduction of lethal genes are unfortunate, but in a small group like the Newfoundland and the American Cream, it is disastrous. With so few left, we cannot risk the introduction of any life threatening addition to their gene pool.

Newfoundland Pony Rescue - is not just about saving an individual pony, rescue in this case is saving the entire breed. But every pony counts.

Where Once They Mattered from Cranky Goat Entertainment on Vimeo.